I have lived almost my whole life either on, or a short drive from, the coast. I can’t quite see the beach from my house, but I can certainly hear it. The air is always heavy with salt, and anything that can rust will do it quickly. Despite having such a magnificent playground right on my doorstep, it is not a potential I use a great deal. This is my loss, because it is always worthwhile.

Another expedition with the homeschool group, this time we were exploring rockpools. The education officer from the national park had been organised as our guide. So many people wanted to turn up, it was divided into two groups, according to age. There were about fifteen kids in each group.

Everybody had been sent a link to an education package to look at before turning up. The boys and I played with this the day before we went. As with so many lesson plans, I struggled to estimate how much how much time this would take. We got a couple of hours out of it.

A steamy day which turned into thunderstorms that afternoon, it was still a hot, bright morning. Sun protection is always a must for this sort of outing. I was delighted that we found a crested horn shark egg almost as soon as we walked onto the beach. Not a very unusual find, but always a nice one. The little strings at the bottom, tangle in the kelp and keep it anchored there. The spirals shrink in as they dry. You can see this one starting to dry out a little. It was empty, so somewhere there is a baby swimming around, which I thought was kind of cute.

Big piles of leather kelp had washed up on the sand just before the rocks. The wave action pushes it into mounds in the corner of the bay along this stretch of beach. Here is one of the holdfasts. They usually look like this, but sometimes they are wrapped around fist sized chunks of rock they tear off when they are washed up. If you are wanting to be a motorboat or aeroplane, kelp holdfasts make good engines.

Here is a cart rut shell. It is a heavy, rugged piece of equipment. I quite like them, even though they don’t look very impressive. They are fairly common, and very distinctive, with those deep ridges running across the shell like that. The cart rut shell is a serious predator on the rock platform. I learned that the little chute at the top of the aperture is the siphon notch, which gives an opening for the snail to fire a harpoon into it’s prey.

The pools are home to a host of different types of weed, little fish, anemones, star fish, shrimp, and crabs. You need to develop a sense of patience and wonder to appreciate them fully. They rarely make themselves immediately obvious. I did not see any on the day, but sea cucumbers can be found, and if you are lucky, you might spot an octopus. 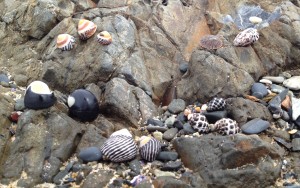 We were kind of running out of time, but we managed a scratch around in the shell bed. This is around the high tide mark, where all the small to medium sized beach detritus is sorted by waves into size. Here are a few shells I quickly grabbed in a couple of minutes.

Front centre is a couple of zebra top shells, a common herbivore on the rock platform. I learned that the width of the black stripe indicates their nutritional status. The thicker the stripe, the better fed the snail.

Moving clockwise are a couple of black nerides, another common herbivore. Although I never recognised them before, baby black nerides look like tiny black dots. They are everywhere on the platform where it is damp.

I could not find out what the next group are, other than to say they are quite pretty, and extremely common.

Next is a limpet shell next to something else I don’t recognise. Our guide told us that because they live in a zone where the wave action is particularly strong, the limpets grind themselves a shellprint in the rock, and return to the same place each tide, to hold on better.

Last is a small group of mulberry oyster borers. They are also quite common. As the name suggests, they are one of the hunters here. 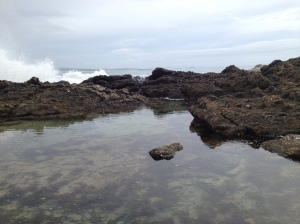 So that was our morning at the rockpools. A harsh and changeable environment, it is a whole other world living on a small scale, and at strange time frames. Quite a fascinating place.

I am a homeschooling dad with a wife and two boys. I'm not quite sure what I'm doing, so I feel compelled to write it all down. In my spare time, I work as a manager for the local health district, drink too much coffee, and am an overenthusiastic martial artist.
View all posts by Blokeschool →
This entry was posted in Nature and tagged bloke, homeschool, learning in context, nature, ocean, shells. Bookmark the permalink.

8 Responses to The rockpool