We had organised to be part of a bush walk with the local homeschoolers group. The idea was that we would all go for a walk along a nearby creek. The track leads up a shallow valley, crossing the creek bed several times, and ends in a small waterfall.  Everyone would bring a boat of some description to play with in the waterholes.

The first step, of course, was to build ourselves some boats.  We scratched through the wood heap, pulled out some likely looking pieces of firewood, and tested their floating capacity in a bucket of water.

That all went well, so we cut, nailed and rasped them into shape. Then using crayons and paint, we decorated them.

A couple of dozen people turned up on the day. I have rarely gotten together with a group like this. The dynamics of it impressed me very much. I liked the broad spread of ages from the two year old to the grandparents. With no strictly defined roles, there was a bit of a blur between some of the younger parents, and the older kids. I simply cannot remember the last time I was with such a large group of such a wide cross section of ages, who had simply come together for some gentle fun.

We set out, with the young kids tearing off in front. There is a lot to be learned from nature studies. It was a couple of kilometres before we arrived at the falls. It is the end of a long, hot summer here. The creek was dry for most of its length, and the falls reduced to a trickle. Still, the teenagers climbed to the top, and everyone else played in the muddy pools at the bottom.

Everybody’s boats had a go in the water. I liked the variety of boats that people produced. They were made from wood, plastic bottles, foam, and milk containers. Someone had made a raft out of sticks. Some of the boats had crews, others had sails. It was great to see the diversity of interpretation that went into the suggestion to ‘bring a boat or anything that floats.’ 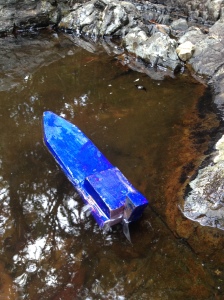 When enough people started feeling tired and hungry, we all headed back. There was still enough energy to appreciate the details of where we were walking.

Every kid seemed to climb the lianas which wound up into the canopy. We stopped to look at the buttress roots on some of the trees. Inspired by jungle tribes of New Guinea, we tested the idea that if you kick a large buttress, it acts like a drum. Bright red leaves which had fallen, highlighted the soft greens and greys of the forest floor.

At last, we made it back to the park where we had started from. Everyone shared a picnic. One of my boys found a leech on himself. This did not surprise me, although his reaction did. There were no tears or screaming or panic. He just watched the blood globbing out of his toe.

‘Look,’ he observed. ‘The leech makes a chemical which stops the platelets in my blood from working.’ Clearly, he has picked up more from his physiology books than I realised.

I am a homeschooling dad with a wife and two boys. I'm not quite sure what I'm doing, so I feel compelled to write it all down. In my spare time, I work as a manager for the local health district, drink too much coffee, and am an overenthusiastic martial artist.
View all posts by Blokeschool →
This entry was posted in Nature and tagged anatomy and physiology, bloke, homeschool, learning in context, nature, science. Bookmark the permalink.

8 Responses to Float your boat