Our history lessons are shifting away from Egypt and the fertile crescent and into the Aegean Sea. We spent a morning looking at the ancient Minoans.

The morning began with a deal of time looking at maps. The island strewn Aegean is quite a contrast to the broad, flat, semi arid lands of Egypt and Mesopotamia. This was a good way to realise why the Aegean was filled with independent city states built on trade rather than sprawling empires built on conquest. It also showed how much the culture was dominated by the sea. We had noticed that lots of the pottery was decorated with things like fish, octopus and shells. 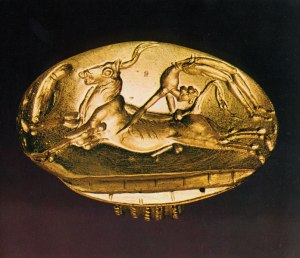 The boys have seen a movie of Jason and the Argonauts before, so they have at least a brief idea of the mythology which used to rule that part of the world.

One of the ideas I was explaining was the importance of bulls in Minoan civilisation. A big part of this was the sport of bull jumping.

The internet being what it is, we managed to find a youtube clip of some modern day bull jumpers from Spain. It was pretty fun to watch, the bulls don’t get hurt, and it certainly brought the ancient frescoes to life.

Although the penalties for error while somersaulting over a bull are fairly high, we noticed that the actual number of moves the athletes had to master seemed fairly small. They are all similar to moves the boys are working up to in their gymnastics classes. The boys figured that if we started training on small goats, it would only be a matter of time before they were able to build up to jumping bulls themselves.

When looking at Minoan culture and their bull cults, sooner or later, you are going to end up at the story of the minotaur. For those who don’t know the story, the bones of it run like this.

Minos, a Cretan king, cheats the god Poseidon out of a sacrifice by withholding a certain bull. Feeling slighted, Poseideon causes Minos’s wife, Pasiphaë to fall in love with the bull, have sex with it, and give birth to the minotaur. Unwilling to kill the creature, Minos keeps it in a labyrinth under his palace, and feeds it on human sacrifices from Athens. Theseus, the Athenian prince, volunteers to be sent to Crete for the minotaur to eat. On his arrival, he mets Ariadne, daughter to the king, and half sister to the minotaur. Ariadne is smitten by Theseus, and gives him a sword and a ball of string. He enters the labyrinth, using the sword to kill the minotaur, and the string to find his way back out again. Theseus and Ariadne sail back to Athens, but he dumps her during a stopover along the way. In all the excitement, he forgets to send a prearranged signal to his father, Aegeus, confirming his safety. Aegeus thinks Theseus is dead, and kills himself in his grief. Theseus becomes king of Athens.

Like many myths, there is a lot of weirdness, backstabbing and tragedy built into this story. It also probably has some basis in historical truth. Maybe Theseus was based on a real individual or group who broke up a sect of Minoan priests who took their devotions further than anyone was happy with. It is the kind of thing I like to speculate about. 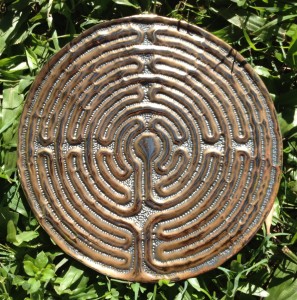 Anyway, this led to us looking at labyrinths more generally. We spent some time looking at designs and construction styles of different labyrinths. They can be quite mesmerising things.  I was also able to show off a Chartres labyrinth I made out of brass some years ago.

The whole lesson culminated in a graphic retelling of Theseus’s harrowing journey into the labyrinth through the medium of Lego. Here, he sets off holding his sword, while Ariadne stands at the doorway, feeding out the ball of string. We didn’t have a minotaur exactly, but a large caveman fitted the role well enough.

I have always enjoyed ancient Greek mythology. The way it is so intertwined with the history of the place means you can’t really study one without the other. This was a mornings work which I thoroughly enjoyed. I am quite looking forward to the next few weeks of playing around with more of this.

I am a homeschooling dad with a wife and two boys. I'm not quite sure what I'm doing, so I feel compelled to write it all down. In my spare time, I work as a manager for the local health district, drink too much coffee, and am an overenthusiastic martial artist.
View all posts by Blokeschool →
This entry was posted in History and tagged ancient greece, bloke, history, homeschool, Lego, maps, Minoan, mythology. Bookmark the permalink.

10 Responses to The Minoan bulls