Posted on October 7, 2014 by Blokeschool

‘Take a look at this piece of wire. It’s a very heavy gauge, nearly as thick as your finger. It’s very strong. We can hardly bend it.

But now look. If we put it into the bolt cutters and give them a squeeze, it cuts through the wire with no problems. See that? If you put your finger in the bolt cutters, you will snip it straight off before you even know what you have done. Understand?’

‘Good. Never touch the blades of the bolt cutters. Always keep your fingers clear. Here they are. Have fun.’

My boys get a lot of leeway when it comes to using tools. I have arrived at the idea that learning safety around tools comes from using the real thing, and understanding there is a genuine risk involved. Risk and responsibility are strongly intertwined.

Partly this all began by turning a necessity into a virtue. Like kids everywhere, they want to be a part of whatever is going on. From the moment they could walk, I could never keep them away from the tools anyway. The obvious thing to do was give them safety lessons.

Kitchen knives are a good place to start. A large part of the day is spent in the kitchen anyway. The knives are generally well balanced, which makes them easy to use, and they come in a variety of different sizes. The bonus is that once the boys could use them reasonably well, they were that much more able to get something to eat for themselves. It was a win win situation. Kitchen knives also come with my favourite safety rule – ‘You are not allowed to hold a knife if you are feeling angry.’

Most of the safety lessons are fairly generic, and basically involve getting the boys to pay attention to what they are doing. As with knives and bolt cutters, however, some tools and situations have rules which are quite particular.

To prevent the common beginners mistake of holding a piece of wood in one hand, and using the other to wield the hatchet which hits it, ‘always use the hatchet with two hands on the handle.’ In a moment where I was relieved I had not put in the effort to sharpen the blade, this rule has only been forgotten once. 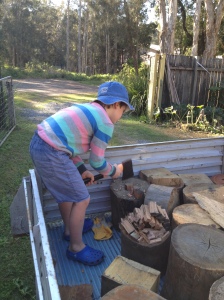 While I am comfortable with them climbing onto the roof of their cubby, they know that they ‘don’t stand on the piece of plastic sheeting.’ So that I can walk around without fear of being shot, we all know that you ‘wait until everyone is standing behind you before you load an arrow onto your bow.’

While they are not the most outdoorsy boys I have ever met, they are certainly a deal more physical than many. They spend a lot of time in the back yard or their cubby ‘doing work.’ This often involves building precarious piles of stuff, hitting various things with hammers, pruning plants with anything which will do the job, and tying lots of stuff up with rope. It is almost all unstructured, and consequently, they have a lot of confidence when doing stuff which involves working with tools, climbing difficult things, or lighting fires.

This confidence is largely justified. For all their casual attitude and rampant enthusiasm, they give a lot of thought to safety. Considering what they get up to, they do not seem to hurt themselves any more often than a reasonable adult would. Nothing has ever been so bad that it can’t be fixed with a cuddle and a band aid. 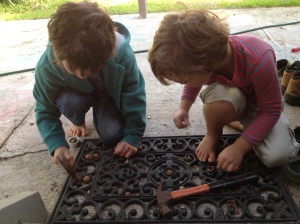 Despite this, it is not a path which is free from difficulties. The day the homeschool assessor came over, my boy amused himself by chiseling a couple of holes into a table. There have been some inappropriate situations involving handsaws and furniture. It has required a concerted effort on my part to get them to stop levering up the floorboards in their cubby. When I find the pliers lying on the lawn in the rain, I hear myself giving the same angry rant that my dad would give to me all those years ago, and I see it fall on the same deaf ears.

It is a happy chain of events which has led them to a real sense of initiative and independence. They are still not allowed to use the circular saw, though.

I am a homeschooling dad with a wife and two boys. I'm not quite sure what I'm doing, so I feel compelled to write it all down. In my spare time, I work as a manager for the local health district, drink too much coffee, and am an overenthusiastic martial artist.
View all posts by Blokeschool →
This entry was posted in Teaching and learning and tagged bloke, confidence, flexibility, homeschool, learning in context, life experience, negotiation, play, safety, self determination. Bookmark the permalink.