I have been looking at local history in a fairly half hearted fashion lately. These history lessons come about partly because I wanted to instill the idea in the boys that the world they look at is both very new and very different to anything that has come before it. Partly it is simply a curriculum obligation.

I had a not especially fruitful dig around at the local library for some relevant books, and came up with one that was not very well written, but had lots of old photos in it. The bulk of them date from the late 1800s through to the mid 1900s. Although, obviously, the place names are the same, everything has changed beyond recognition. It is only when the photo captures some distinctive landform, that I am able to work out precisely where they are.

So, there I was, reading largely to myself in front of my disinterested son, who was drawing unrelated pictures in his book. I was pointing out the huts that people lived in, that they mostly rode horses, and the fact that the breakwall and marina is missing from pictures of the harbour.

None of it was making much impact, and because it was late afternoon, I gave up and went to light the fire for the night. He joined in for a little while before stealing a piece of bark off the woodpile and disappearing into the kitchen with it.

A short time later he called me in to urgently look at what he was doing. When I arrived, he had set up the piece of bark so that one end went into a little tub and the other was raised up on a pillar of plasticine. He was pouring cupfuls of water down it like a small chute. 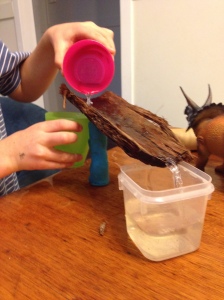 He was pretty impressed with himself. ‘I wanted to see how waterproof it was,’ he said to me. ‘It works surprisingly well doesn’t it?’ I replied. ‘You know people used to make roofs for their huts out of bark like that?’

‘Yeah, I know,’ he says, clearly speaking to a kindly halfwit. ‘You just told me all that.’

I am a homeschooling dad with a wife and two boys. I'm not quite sure what I'm doing, so I feel compelled to write it all down. In my spare time, I work as a manager for the local health district, drink too much coffee, and am an overenthusiastic martial artist.
View all posts by Blokeschool →
This entry was posted in History and tagged bloke, experimentation, history, homeschool, local history, nature, play, science. Bookmark the permalink.