The elephant in the room

This being our starting year of homeschooling, one of the first things I did was join the local homeschool group. By way of introduction, I organised a weekly chess class. I found a teacher and a room, drummed up some enthusiasm, and the whole thing has been running quite nicely.

When I first tracked down our teacher (ironically, a retired school headmaster) he was immediately enthusiastic. Among other things, he made a number of disparaging comments about how maths is taught in school. He also insisted that kids who play chess have improved musical ability. It made sense to me. Both chess and maths involve adaptive pattern recognition. I took it on board as a curious aside, and didn’t think much more about it.

I certainly didn’t take into account how suddenly and literally such a connection could take place.

Unusually, I missed chess class the other day, because I was at work. My wife took the boys along instead. These classes never end neatly. Somewhere just before the hour mark, they start to descend into chaos as the various games wrap up, and all the kids run off to play in and around the building. This week, one of them noticed a piano in the corner, and started playing. 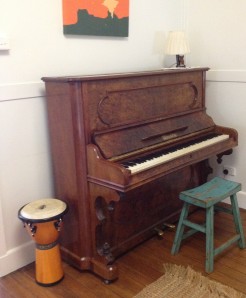 It turns out that he taught himself. He had been getting formal violin lessons, and then just decided to translate the principles to another instrument. Oblivious to all of this this, I received a phone call that afternoon.

“Guess what? I’ve bought a piano!’ I had been wondering how the day was progressing. I have to say, I had not expected it to run along those lines. Admittedly, it was an idea we pushed around some time ago, so it was not quite so random as it sounds.

The piano arrived a couple of days later. We could have bought an electronic keyboard for a fraction of the cost, but I think it would also have had just a fraction of the impact. I am quite smitten by our new purchase.

Built a century ago in Germany, it is an upright Ronisch which has just been restored. It has a splendid walnut veneer, which radiates a warm wooden glow. There are screw holes in the front, where it used to hold a pair of candelabra. The keys are genuine ivory. Due to some misadventures on the day of its arrival, it has not been tuned yet. Even slightly out, it sounds magnificent, and has a soft, rich tone to the quality of its notes. It is also an obvious resting place for the obscure dog shaped lamp my grandmother bought in the 1930s which I have never been able to work out where it belonged.

None of us know quite what to do with it. We have not found a teacher yet. I had piano lessons over thirty years ago, and went through an enthusiastic stint of violin playing which stopped when the kids were born. Even at the height of my (much declined) abilities though, I was barely a mediocre player at best. Still, there is something about this piano which just draws you in to sit and play with it, just to listen to what it does.

Both the boys enjoy experimentally plonking along the keyboard. Despite simply pressing keys in a semi random fashion, my youngest boy especially, is able to make this sound delightfully musical. I am unable to pick exactly what it is that he does differently, but it is something. So much of what he experiences is tagging along behind his older brother, I like to quietly hope that in music, he will find an area where he can take the lead.

Of course, for all its size and volume, the piano needs to be treated gently. It is important to recognise that the boys can take their raucous play to some fairly serious levels. Consequently, the piano comes with rules. These rules hinge around not banging on it, and taking care of the keys.

As my wife explained to the boys, ‘These keys are made from elephant tusks. If these keys are broken, we are not going to kill an elephant to fix them, are we?’ Obviously, if a key was broken, after a degree of drama, we would find a plastic replacement. Maybe after quite a degree of drama, we could even find an ivory replacement, but all of that argument misses the point. The point is that we need to treat this intriguing piece of equipment with respect.

It certainly got the message across, but it was an odd turn of phrase which I had never really considered before. It added a nuanced layer to my new relationship with our piano. This beautiful musical engine sitting in our living room is partially constructed from the body parts of long dead elephants.

I am a homeschooling dad with a wife and two boys. I'm not quite sure what I'm doing, so I feel compelled to write it all down. In my spare time, I work as a manager for the local health district, drink too much coffee, and am an overenthusiastic martial artist.
View all posts by Blokeschool →
This entry was posted in Music and tagged bloke, chess, homeschool, music, piano. Bookmark the permalink.

4 Responses to The elephant in the room