Our house makes up part of the coastal sprawl which stretches, with differing densities, for hundreds of kilometres in either direction. The house itself is an old one which was relocated just a couple of years before we bought it, and placed on a block of fill on the edge of a tea tree swamp.

A large remnant of the swamp is outside our back door. In its own swampy way, it is very pretty. I don’t go in there much. It is crawling with ticks and leeches, and constantly emits endless clouds of mosquitoes. Over the blisteringly hot summers we get here, it dries out, and then I live with a vague sense of unease that some local juvenile delinquent will set it on fire. All the essential oils in those trees would make such an event extremely unpleasant.

I love having it there, though. Not only does it look beautiful and give lots of privacy, but it supports a great deal of wildlife. Our lives often bump into each other.

Brightly coloured dragonflies zigzag around us for most of the year. Frogs and lizards live under anything and everything which gives them cover. Different snakes wander through our yard from time to time. One of the reasons we don’t have any chooks, is that they kept on being eaten by pythons (and wandering neighbourhood dogs). A small mob of kangaroos often grazes in our back yard, and lounge around in the sun. Sometimes in wet weather, they take shelter under the kids trampoline. The occasional goanna comes along, searching for birds eggs I guess. Possums stomp around on our roof like a party of heavy footed builders. Once, an itinerant camp of flying foxes  set themselves up for a couple of months outside our back door.

We get lots of birds here as well. Most obvious are the bush turkeys. I like them a lot. There is a group of around half a dozen who live around here.

In the bush turkey, it is easy to see the jungle fowl forebears of the domestic chook. Larger and rangier than chooks, bush turkeys share many of their characteristics. They are not very bright. They wander around the yard, cocking their heads to view the details, before scratching and pecking at whatever they are trying to explore. They make cute, honking ‘bok bok’ noises to themselves when they are happy. At night, they fly clumsily and in stages up in to one of the trees near our front door to roost. From there, they can strategically crap on the car and path.

Bush turkeys have a lot of character, which I think goes a long way. They bring the humour and enjoyment of owning chooks to the household, without any of the responsibility. The only thing you really miss out on is eggs.

But then one of them had an idea.

Bush turkeys belong to a group of birds called megapodes (Large foot). All these birds make a living scratching through leaf litter. A lot of people find that bush turkeys will scratch over and completely destroy a garden. They have never done it to ours, but I am not sure why not. They scratch through mulch with a single minded determination. It is their defining feature – hence the name megapode.

Megapode nests are quite fascinating structures. Rather than nesting in any usual sense of the word, they will instead rake up all the leaf litter over a ten or fifteen metre radius and build it into a large mound. Essentially, they make a large compost heap to lay their eggs in. This one started to make a mound in our neighbours front garden. Here it is after a days work. 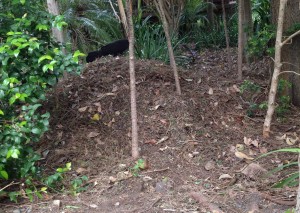 They never sit on the eggs, but they check the mound constantly, and vigorously defend it. As the mound starts to compost, it warms up. They lay eggs in it and regulate the temperature by either adding or removing layers. The incubation period is about seven weeks.

I was quite thrilled at the prospect of having a mound we could watch from our front deck. I have never seen a working one. Unfortunately, after a couple of days of continuous effort, he suddenly decided it was not such a great idea after all, and simply walked away.

I am not sure why he stopped. They can nest any time of year, although September to December is peak breeding season, so it was a little odd to start with. Maybe he decided it was the wrong time of year. Perhaps he couldn’t get a girl. He might have been driven off by marauding cats. I really don’t know.

I was still impressed by it, though.

I am a homeschooling dad with a wife and two boys. I'm not quite sure what I'm doing, so I feel compelled to write it all down. In my spare time, I work as a manager for the local health district, drink too much coffee, and am an overenthusiastic martial artist.
View all posts by Blokeschool →
This entry was posted in Nature and tagged bloke, bush turkey, chook, homeschool, learning in context, life experience, nature. Bookmark the permalink.

2 Responses to They’re not too bright, but I like them.