Although our maths lessons contain basics like counting, adding, subtracting, and grouping things, I find it much more interesting to explore mathematical concepts. I have seen quite a lot of people discussing moebius noodles, and have just recently managed to acquire a copy of their book. It is full of ideas which can be as simple or difficult as you are prepared to make them, which is what I enjoy about it most. It is a book of easy complexity. 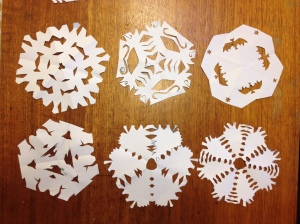 The first idea which we started looking at was radial symmetry. There was no real reason for picking this over anything else, other than it was eye catching.

The adults did most of the folding and cutting, while the kids drew patterns to cut. We discussed how the different shapes unfold, and noticed that you end up with a lot of blank paper if you only cut a pattern around the edge of the folded shape. Each sector of the snowflake is a mirror image of the one next to it, while each pair is identical to its neighbouring pair, something else we talked about. Also, of course, how you fold your paper determines whether you end up with a hexagonal or octagonal piece. 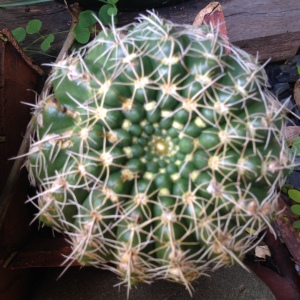 Later on, we had a bit of a look through the garden for natural examples of radial symmetry. There are plenty in the plant kingdom. A pumpkin flower and a cactus were some easy finds. Cutting across almost any fruit or melon would show a radial pattern, some better than others. Mushrooms gills represent fungi, and if you wanted animal representatives, starfish or sea urchins would be a good place to start.

That afternoon, we had a go at co-variance grids. The book was lying on the table, so it was more an opportunistic grab rather than an actual lesson. I was getting ready to go to work while this was going on, and you can see where I get distracted in the second column, and leave altogether by the third.

It didn’t really work as a co-variance grid, but I got some good pictures of a spider rampaging across the page before being struck by lightning, some close ups of a monster with a bum on its head squashing different people, and a man eating so much pasta that he explodes. I think that makes up for it.

We had another go the next day using a chess board and some Lego pieces. Because there was so little room for free expression, it worked much better as a mathematical model. Probably for the same reason, it did not generate a great deal of interest, though, and we pretty quickly moved on to building a castle instead.

I am very much taken by the idea of simple complexity in mathematics. I plan to use it a great deal over the years. I found a good explanation of that idea in this article, which is what really inspired me to get the book in the first place.

The article explains that much of the process of teaching maths as we know it, is simple but hard – the constant repetition of small tasks. Filling out a worksheet with 100 two digit addition problems, or digging a trench with a spoon are two examples given of something which is simple but hard. Although a commonly used teaching method, it will never inspire a love of learning, or a passion for the subject in question.

In contrast to that, principles such as radial symmetry and co-variance can be extremely complex in their applications. At the same time, the underlying principle is so simple that a five year old can play with it and get an exciting result. You can vary the level of complexity to suit the learner, but the basic idea remains a simple one.

In the example of our co-variance grids, we seemed to shoot either side of the level of complexity we were aiming for, but that is just a detail. The Lego shows he understands the idea, and the drawing shows he is willing to play with it. I think that is the key to any learning experience.

Easy complexity. I believe I have learned to use an extremely valuable tool.

I am a homeschooling dad with a wife and two boys. I'm not quite sure what I'm doing, so I feel compelled to write it all down. In my spare time, I work as a manager for the local health district, drink too much coffee, and am an overenthusiastic martial artist.
View all posts by Blokeschool →
This entry was posted in Experimentation, Math and tagged bloke, easy complexity, experimentation, homeschool, math, play, radial symmetry. Bookmark the permalink.