How to steal stuff from Bunnings.

In this part of the world, hardware stores are dominated by the chain store Bunnings.  Like many big chain stores, they are large, soulless places.  I dislike them for a number of reasons.  They sell stuff cheaply, however, and because they monopolise the industry, there are few other options.  I find myself there a fair bit. 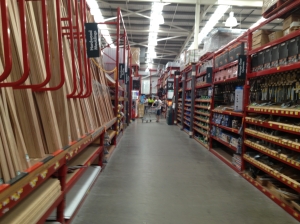 So, there I was in Bunnings, with my son, buying some timber.  It being the sort of place that draws you into its vortex, we ended up with a pile of other stuff as well.  We drove in, loaded our things onto the trailer, paid for it, showed our receipt to the guy on the gate, and drove off.  A pretty standard trip.

My son wanted to know about the receipt.  What was it, and why did we have to show it to the man at the gate.  I gave him a bit of an explanation, and concluded with, ‘It’s so they know we are not stealing stuff.’  There was a small and thoughtful pause before the next question.

I thought of a few options, not all of then entirely appropriate for a five year old, and then suggested that perhaps you could sneak in at night time after everyone had gone home, and steal stuff when nobody was there.

This led to a delightful session of brainstorming and imagination.  With ideas building on from books and movies, he came up with a number of different plans.  They included the following.

You could take a giant teddy in with you.  You could remove the stuffing from the teddy, and fill it with things you wanted to steal.  Then you could just walk right out past the checkout. 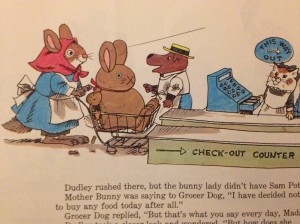 You could go in with a friend.  While your friend distracted the staff, you could hide.  The place is like a giant playground for a five year old.  There are plenty of places to hide, as my son and I can both personally attest.  Your friend goes home, and you wait until night time, when nobody is there.  This avoids the problem of trying to break in.

Most of the conversation hinged around the idea of seeing without being seen.  After a while, he fielded the idea of an invisibility cloak.  This was such an unfair advantage that it seemed to negate the idea of trying to be sneaky, which had really been the whole focus of the session in the first place.  Despite this, it led to my favourite idea of the day.

Wearing your invisibility cloak, you stand behind something fairly big, like a display stand, and then push it over.  Someone comes to stand it back up.  As soon as they have finished, and turn to walk away, you push it over again.  You keep doing this, until they are so frustrated that they get their manager.  When the manager stands it back up, you push it over again.  The manager then gets so annoyed, that they ring up the factory, and start yelling at the people at the factory.

‘You didn’t make this thing properly.  It keeps falling over.’

The people at the factory get equally angry.

“We made it properly.  You’re just too stupid to stand it up properly.’

You have now successfully engineered a savage argument between two strangers, and neither of them have any idea that you are reason they are arguing.  This would be ‘really funny.’

The whole conversation was a kind of silly application of a subject which was morally dubious to start with.  It’s not the subject I would have chosen for a lesson, but here at bloke school, we take our opportunities as they arise.  Nonetheless, it was charmingly engaging, and filled an important purpose, I think.  Although ostensibly a study in law breaking, we were really engaged in a series of thought experiments on how to outsmart an implacable system. 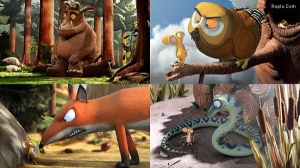 Kids are small and weak in a large and dangerous world, and they know it.  They love the idea of outsmarting people.  It gives them the only advantage they can get. This is why children’s literature is stuffed full of protagonists who survive by their wits.

These conversations provide a safe place to explore these concepts, and allow children to be the hero of their story.  It’s a kind of rough and tumble game for the intellect.  Just like physical play, these games build courage and confidence.  They allow kids to take control of their fears, and come out on top.

Who doesn’t make themselves the hero of their own story?

I am a homeschooling dad with a wife and two boys. I'm not quite sure what I'm doing, so I feel compelled to write it all down. In my spare time, I work as a manager for the local health district, drink too much coffee, and am an overenthusiastic martial artist.
View all posts by Blokeschool →
This entry was posted in Experimentation, Life experiences and tagged bloke, confidence, homeschool, imagination, philosophy, play, stealing. Bookmark the permalink.

2 Responses to How to steal stuff from Bunnings.